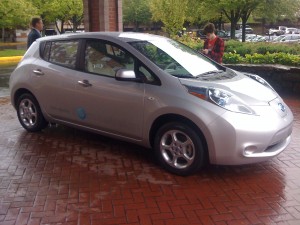 At a recent Massachusetts Clean Cities Coalition Electric Vehicle Workshop, speakers capably covered a broad range of topics relevant to the electrification of transportation, but the most powerful statement may have been made by an inanimate object – the Nissan Leaf parked in front of the conference center. That’s because the Leaf has the potential to be the iPod in the electrification of transportation.

Of course, given the huge difference in scale and reach of the automotive industry compared to the music industry, the Leaf by itself can’t possibly duplicate for Nissan the rapid market transformation and takeover the iPod generated for Apple. But it could be the product that catalyzes that transformation by reshaping how consumers think about transportation the way the iPod reoriented how people get music and entertainment.

The iPod performed the basic function of playing portable music in a superficially similar way to existing devices (a hand-held device with earphones). Its price was in the mainstream, though higher than the cheapest portable devices. But it completely changed how people obtained the music, freeing them from having to buy physical disks and allowing them instead to electronically download music at home at a lower cost.

The Leaf is a five-passenger sedan, not a specialty vehicle like the Tesla Roadster or an electric city van. It is positioned to do the basic job of commuting and local transportation and looks more or less like the vehicles it replaces. It has a purchase or lease price target (after federal electric vehicle tax credit) roughly comparable with other sedans. Drivers of the Leaf will never go to a gas station to buy physical fuel – they too will literally download their fuel at home at a lower cost.

As with the iPod, a physical infrastructure, pricing system and business models have to be developed to support this transformation. Though the scale is such that one can’t imagine one company pulling that off with the speed Steve Jobs and Apple did, it’s worth remembering that very few people thought it could be done at all. The music industry, like the oil industry, was a powerful force in its sphere – an oligopoly of large entertainment companies with deep pockets, a business model to protect and legal and technical challenges it could throw in the way of attempts at wholesale change.

Finally, it’s about the buzz. The Leaf, which will be the first fully-electric, mass-produced mainstream sedan from a major automaker, has generated palpable enthusiasm of the kind one associates with an Apple product. Nissan representatives at the Electric Vehicle Summit confessed that they had been caught by surprise, having originally planned to position the Leaf for large fleet sales. The groundswell of enthusiasm from individual car buyers has completely changed their thinking. People are pre-ordering vehicles online for 2011 deliveries. Nissan is swamped by requests from all over the country to show off the car.

None of that, especially the buzz, assures success for the Leaf. The Leaf is still to be delivered and there is much infrastructure work ahead. The parallels to the iPod are simply a strong reason to pay close attention to the roll-out of the Leaf. If there is to be a watershed event in the evolution to electric transportation in the next few years, this will be it.

Turning over a new Leaf

One thought on “Turning over a new Leaf”