Although it was about as much of a surprise as Joe Biden’s nomination at the Democratic National Convention, the overwhelming opposition to the DoL’s proposed restrictions on ESG in ERISA funds was nonetheless gratifying. Just sampling the comments in the days after they were posted made clear the tenor and tone of the opposition.

Officially, there were 8,737 comments recorded. That number includes multi-signature petitions and submissions. Even with that, there are 1,533 individual documents on the site.  There is a treasure trove of information buried in those responses.  The search function on the site helpfully allows a deeper dive for comments by specific firms or organizations.

As I was sampling the comments – randomly as well as looking to see whether specific firms had weighed in and how – I was thinking about ways to systematically extract the knowledge buried in this large data set. It’s a natural for Python data mining, though that was a much bigger task than I was prepared to take on. Using it to train a machine learning system would make a great research project for a grad student and provide fodder for multiple publishable articles.

I didn’t get much further when a much lower-tech, human intelligence-powered solution presented itself. Thanks to some dedicated members of the investing and sustainable investing community, we have a thoughtful and thorough analysis available for consideration and discussion. 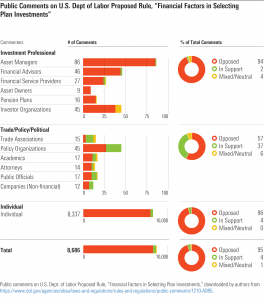 Jon Hale of Morningstar published a terrific article last week summarizing the results of their work – both graphically and categorically. 95% of the comments were opposed to the rule. Investment industry participants were well-represented in the 95%. The 5% included a handful of organizations with no apparent connection to the industry.

Particularly interesting – huge kudos and thanks for the work involved in this part – the team distilled six key arguments that were widely made within the comments. I’ll refer you to Jon’s article for the details. He lays them out clearly and they deserve to be read there. I will include here the infographic, credit Morningstar.

After reading their analysis, I’m even more interested in what that machine learning project would uncover. If there’s a grad student and supportive faculty member out there, I’ll sign up to collaborate on the work and the writing.