For context and insight on this development, join us Thursday, September 17th on our CFA Boston webinar with Ceres on Addressing Climate as a Systemic Risk.

A subcommittee established by a major US federal regulatory agency to examine the risks of climate change has returned a groundbreaking 198-page report unequivocally stating that climate change poses a “major risk to the stability of the U.S. financial system and to its ability to sustain the American economy” and urging regulators to “move urgently and decisively to measure, understand and address these risks”. 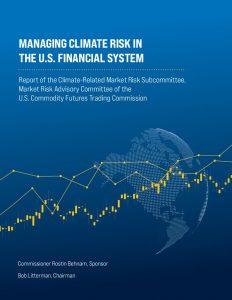 Commissioner Rostin Behnam of the Commodity Futures Trading Commission requested this report, and assembled an all-star subcommittee to deliver it. The subcommittee’s chair, Bob Litterman, is well-known in the investment world. When I was seeking someone with impeccable credentials in mainstream investing to keynote our third CFA Boston Sustainable Investing conference in 2015, I reached out to Bob, who built his career on managing risk. Climate change is one of the largest risks the financial system will ever manage.

If you were there to hear Bob at November 2015 event, you will recognize what he talked about then in this report. Bob has continued to work this problem in multiple venues since then. It’s a high bar, but this may be one of his most important contributions. When I reached him the other night to congratulate him, he was particularly proud of the team that had come together to produce this report and grateful to Commissioner Benham for the opportunity to do this important work.

This report sets the standard for how a regulatory agency should respond to the systemic, large-scale risks of climate change for the financial system. It opens the door for the other critical regulators of the U.S. financial system to follow suit.

There is a lot to unpack in the report itself. The scope, as evidenced by the nine-page executive summary, is breathtaking. The combination of the comprehensive, detailed recommendations of the report and the larger regulatory scope may seem overwhelming. If you can join us for 90 minutes next week, our CFA Boston webinar with Ceres on Addressing Climate as a Systemic Risk will help. The timing is not coincidental, as we planned the date with the CFTC subcommittee report in mind. We will provide regulatory context and insight into the recommendations contained in this report. It is an example of what the Ceres call to action was aimed to prompt, and Ceres President Mindy Lubber served on the CFTC subcommittee that produced it.

The not-so-thin-end of the wedge? A US regulator receives a powerful report on climate systemic risk